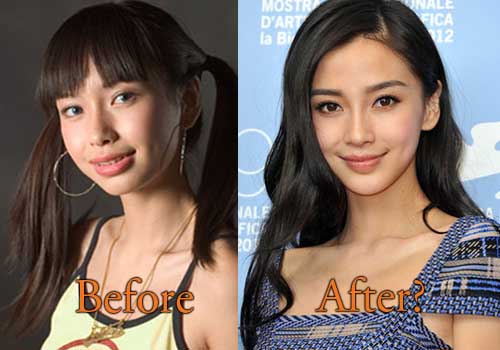 Angelababy Plastic Surgery Before and After Picture

Drastic, dramatic change of Angelababy’s face makes many people believe that plastic surgery has taken part there. Angelababy is a beautiful girl, we couldn’t deny that. However, as you can see in many comparison pictures of her, she wasn’t too beautiful when she was younger.

We all agree that things would change as time passes by. But well, you just saw Angelababy’s before and after plastic surgery picture, could time change her face such significantly? Most of us would doubt that change on her face features comes from her DNA. It was reported that she has had some procedures on face.

Angelababy even need to undergoing some examination to her face recently. Main purpose of that face “investigation” is simply to prove whether she has had plastic surgery or not. Took place in a clinic in Beijing, notaries and journalists were also there witnessing the face examination. Quoted from AsiaOne, Angelababy was proactive.

“Angelababy did not wear makeup and was proactive during the examination. She asked the surgeon to check her forehead, nose, chin, cheekbones and apple cheeks, and said to reporters who were present: ‘Quick, help me think where else.'”

It was said that famous Chinese plastic surgery experts who examined her didn’t find any plastic surgery sign. There are also no cuts found on her eyelids and mouth, parts where she’s rumored with eyelid surgery and lips surgery. Doctors only found that Angelababy has realigned her teeth. Well, Angela Yeung, another name of her, must be happy with the doctor’s finding.

Well, despite significant change happened to her face, Angelababy plastic surgery issue has now come to grey area. What do you think? Has successful Chinese plastic surgery performed on her, or not?