The result of Jane Fonda plastic surgery is obvious. At her 70s, the glamorous grandma attracts people attention with her so youthful appearance. If many celebrities don’t openly admit their plastic surgeries, Jane Fonda does the opposite. Jane Fonda is honest enough by telling media that she has had plastic surgery.

Jane Fonda Plastic Surgery Before and After Picture

Jane Fonda admits some of her fake body parts. Back in 2010, two-time Academy Award winner admitted the work done on her chin, neck and eyes area. And Fonda once said that she wouldn’t get more work done. But, it seems that the temptation of plastic surgery is too hard to resist.

This year, Jane Fonda admits other fake features of her. As she told some media, her hip and knee are among parts that get the surgeon’s touches.

“I have a fake hip, knee, thumb; more metal in me than a bionic woman, but I can still do Pilates,” she said.

Jane Fonda brings her plastic surgery reports out of the grey area. However, some believe that Jane Fonda adds some fillers in her face. Facial fillers such as Botox, Juvederm certainly help her in maintaining her youthful face skin.

The result of Fonda plastic surgery amazes us. She doesn’t look age. Jane Fonda is a real example of forever young. We wouldn’t even find significant change between Young Jane Fonda in the past and Fonda today.

By comparing her Before and After pictures we can see how good Jane’s plastic surgery is. She may have visited professional plastic surgeon and spent much money for such good result. And as she herself said, plastic surgery has made her to appear a decade younger. 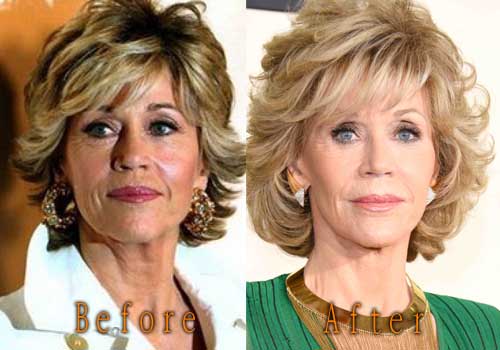 How old is Jane Fonda? Jayne Seymour Fonda was born on December 21, 1937. She is 78 years old, and getting younger.

Uniquely, despite the amazing result of plastic surgery, Jane Fonda told that she is not entirely proud of it. She even wished that she didn’t do it.

“I wish I were brave enough to not do plastic surgery but I think I bought myself a decade.”

Is that kind of regret? So, what do you think about Jayne Fonda plastic surgery?